We are proud to announce the latest Patron of Folly Wildlife Rescue in the form of television / radio celebrity, author, "pop star", conservationist and wildlife advocate Bill Oddie. Among his long list of television and radio credits are "The Goodies", "Britain Goes Wild With Bill Oddie", "Bill Oddie Goes Wild" and "Springwatch".

Bill has also had chart success with "The Goodies" writing and performing on half a dozen top 20 singles, most notably "Black Pudding Bertha" and "Funky Gibbon".

On 16 October 2003, Oddie was made an OBE for his service to Wildlife Conservation. 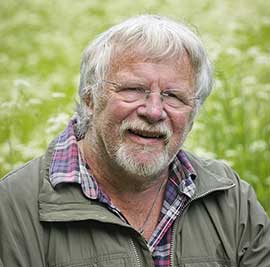 Bills own words ... "One of the few certain conclusions that I have come to during my ever lengthening lifetime is that animals (and birds, reptiles, insects etc) bring out the best in human beings. Unfortunately, they also bring out the worst. Cruelty to animals –wild or captive – shows mankind at his or her most heartless, especially when it is totally gratuitous ,with no other motive than to inflict – and even enjoy-pain or even death. Ghandi said: “The greatness of a nation and its moral progress can be judged by the way its animals are treated.” The word “inhumane” really means that we are letting down our own species, as well as the creatures we should respect, enjoy and care for.

Part of the never ending work of a wildlife hospital such as Folly is dealing with the victims of so called “country sports”, such as hunting and shooting. Let’s face it, no “sportsman” can claim to be unaware of the suffering of his quarry. He may be intent on a “clean kill”, but he knows there will be maiming and injuries and often slow and painful deaths.

However, most of the “patients” brought into Folly are not the result of incompetent sportsmen. After all, can you imagine a shooter bringing in a damaged pheasant and admitting “sorry, I only winged it! Do you think you can fix it up?” Most creatures are brought in or reported by the public, who wouldn’t dream of inflicting harm themselves. And yet –unwittingly – they may already have done. Motor cars skidding round country roads hitting any animal that tries to cross, fly tipping which scavengers from foxes to Red Kites may regard as an easy meal and then be poisoned or tangled up in tin cans and plastic bags, wire fences that come loose and are as lethal as the snares game keepers set to “control” predators. We talk of “nature red in tooth and claw” but it has been made a lot more “unnatural” and perilous than it used be. By us!

Which brings me to Folly. So far, I have only made one visit, but believe me it only takes the first glance to recognize a set up that has totally–as they say – got its act together. The buildings are immaculate and expertly designed to accommodate the variety of “cages”, pens and equipment. “State of the art” is the appropriate expression for treatments, medication, therapies, research etc., etc. Plus, of course, the healing hands, which are the patients’ greatest need. No creature is refused admission and all are eventually returned to the wild. On my visit, temporary residents included several foxes and hedgehogs, and a disproportionate number of doves and pigeons. I don’t want to be contentious, but I suspect cats!.

If I had to chose a few apt adjectives to describe Folly they might sound a bit unromantic – organised, authoritative, informative, constructively co-operative , with an already active plan for future expansion. Sounds like business talk!? Well, so it needs to be. A fondness for animals is of course essential, but sentiment is not enough. However, this does not mean that soppiness is taboo, and appropriate cuddles are certainly not banned. I quote my wife and daughter who did the guided tour with me: “Oh! Aw! Bless! Oh sweet! Oh, poor scruffy little thing.” Actually I think that one may have been aimed at me. They were knocked out!" 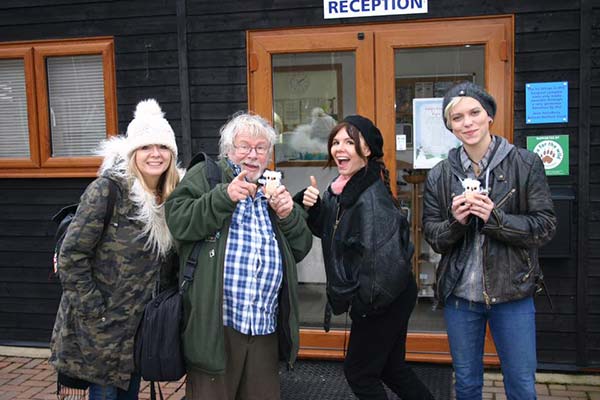 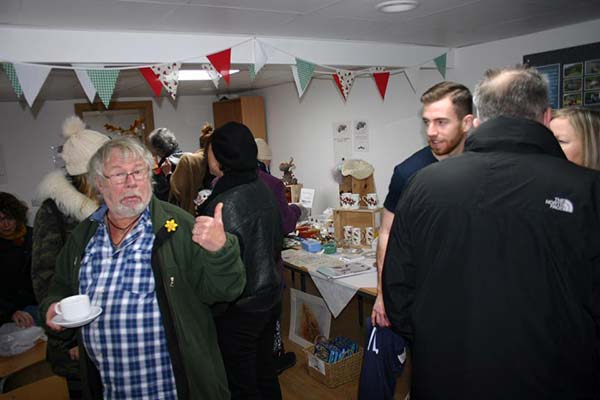 We first got to know Jilly in 2004 when we were called to assist with a fallow deer she had rescued after it had been caught on a wire fence on the Ashdown Forest.

With the help of a vet, the deer, which was housed for two weeks in one of Jilly’s stables, went on to make a full recovery and was later released back onto the forest.

Jilly started as a journalist and author, contributing to most of Britain’s national newspapers and glossy magazines. As well as writing about wine, she has written about travel, women’s issues, sex, the occult and a wide range of general features. She also contributed to five volumes of "Food & Drink", "The Special", "Entertaining with Food & Drink", "The Big Food & Wine Drink Book" and co-authored "Your Hand (A Guide to Palmistry)". 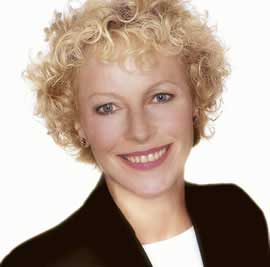 An experienced lifestyle presenter, series include "The Great Antiques Hunt", "Going, Going, Gone", "Holiday" and "Extreme Health". And in the world of food and wine, Jilly played judge for the contestants of "Soapstar Superchef" and "Britain’s Best Dish", besides fitting in regular appearances on "Saturday Cooks!" and "Daily Cooks!".

Reality appearances include "I’m A Celebrity - Get Me Out Of Here!" and "Celebrity Wife Swap".

Jilly kindly donated her substantial share of the telephone vote from "I’m A Celebrity - Get Me Out Of Here" to Folly Wildlife Rescue. 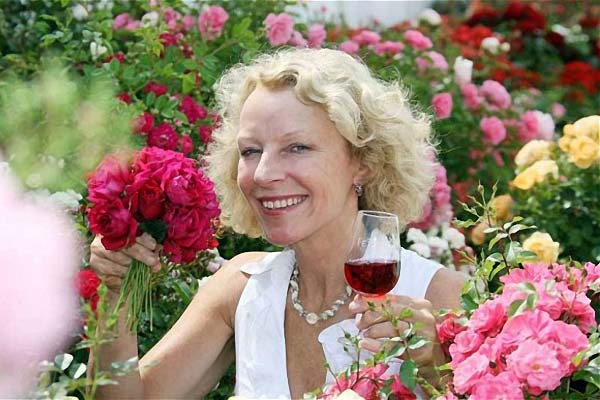 As with Jilly, we first met Jeff and his wife Sandra when we were called to assist with a deer (in this case a fallow fawn), which had become entangled in fencing on their property. Unfortunately, the fawn did not survive, but Jeff was more than happy to help by becoming one of our patrons.

Over the years both Jeff and Sandra have been very supportive, organising numerous fundraising events and actively promoting our work with wildlife.

Jeff is one of the world’s leading guitarists and after famously replacing Eric Clapton as the Yardbirds’ lead guitarist in 1965 on the recommendation of Jimmy Page, Beck went on to form The Jeff Beck Group, which featured Rod Stewart on vocals and Ron Wood on bass. 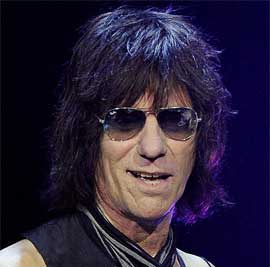 Constantly evolving, Beck’s next move would be to form a power trio with bassist Tim Bogert and drummer Carmine Appice. Jeff then went on to form the Jeff Beck Group releasing the critically accliamed "Blow By Blow" and "Wired".

1985’s “Flash” earned the Best Rock Instrumental Grammy for the song “Escape”. A second Grammy came with “Jeff Beck’s Guitar Shop with Terry Bozzio and Tony Hymas”, and a third for “Dirty Mind” from the “You Had It Coming” album in 2001.

The song "Plan B" from the 2003 release "Jeff", earned Beck his fourth Grammy Award for Best Rock Instrumental Performance. 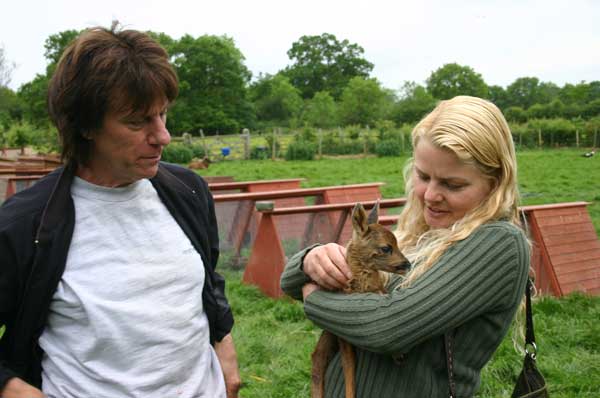 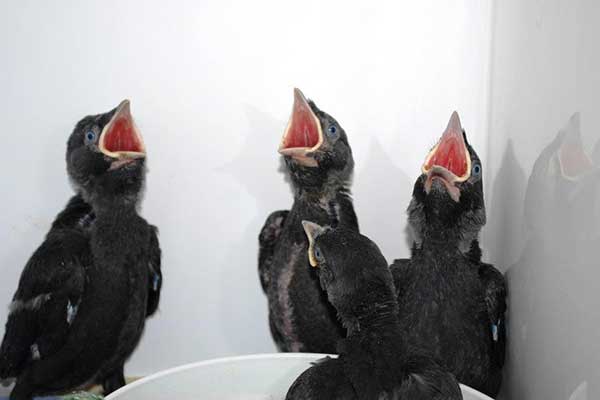 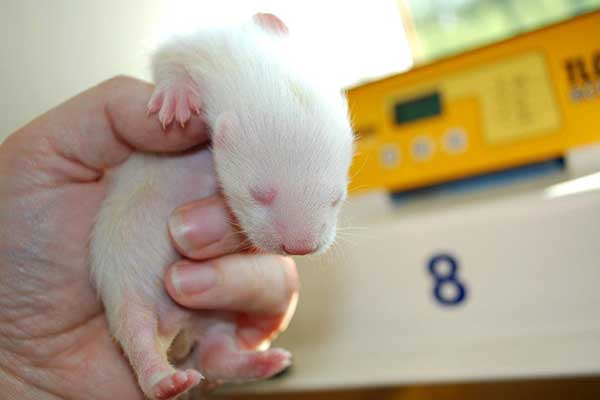 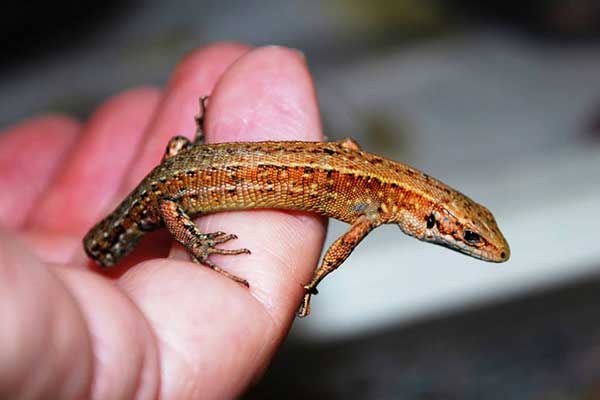